This week we are learning about positional language, which is the words that describe position such as behind, next to, in, on top and in front. There are two ways in which children learn this, by being able to place themselves or an object into a position when asked or by looking at a picture or object and describing its position themselves. 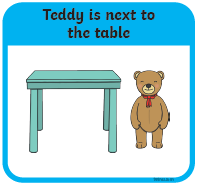 First, have a look together at the ‘where is teddy’ picture cards above. Look through the pictures together, asking your child if they can tell you in each picture where teddy is. You might find that your child will point to the teddy and say there, that is okay, just say to them ‘yes he is there, he is under the table / he is next to the table’ etc.

Next, ask your child to choose one of their teddies or toys to play a game with. Once they have chosen one, can you ask your child to place the toy in different places using the positional language words from the teddy pictures. For example, can you put dolly on the chair / under the table / in front of the tv etc.

As you play the game, can you take photos of what your child does and email them in to our Nursery email address so we can make a positional language photo book of all the children? We would really like that!

Using the ‘where is teddy’ pictures above, remind your child of the positional language words that you started to learn yesterday. Ask them to point to the picture where teddy is in the box / behind the table etc.

Today we would like you to play a game where your child will put themselves into places / positions when you give them an instruction. This would be a good game to play outdoors if the weather allows, so your child can get active and run off some energy! Can you ask them to place themselves:

objects in the house / garden / park if you fancy a walk out for some daily exercise! You could also extend the game by asking your child to give the instructions for you to follow. Again, we would love it if you could send us a couple of photos via email!

Remind your child of the positional language we have been learning this week. We would like you to play another game using a small toy of your child’s choice today. While they find a toy, you will also need two other objects such as a cup and a box. This time, you are going to place the toy in different positions using the two objects you have got and your child is going to tell you where the toy is. For example if you put the toy under the cup, are they able to use the word ‘under’ to describe to you where the toy is?

The positional language that we are wanting the children to be able to use to describe is: